For the past 13 years or so video sources at LiveNirvana have been distributed in DVD format where possible, and this was accepted as the preferred format. An encoding standard was also set for 8Mbps CBR video and LPCM audio.

With regards to archiving videos not many clear guidelines were in place, some tapes were digitised lossless, some only to DV. Many of these were discarded due to lack of HDD space in those years.

Following discussion with the staff a new standard has been agreed upon that will be the recommended format going into 2018 and beyond. Below you'll find the new guidelines along with explanations for each choice. This will cover both archiving and encoding for public distribution.

To begin, here is the TL;DR of the new recommended formats for archive video and encoding video for distribution. 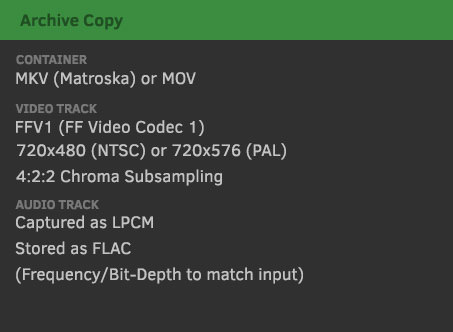 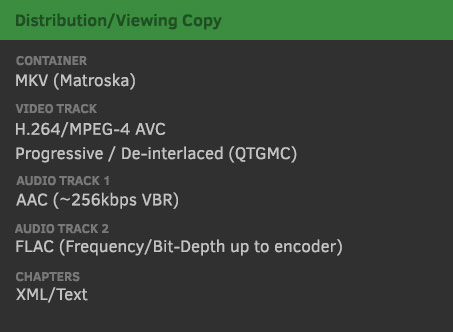 An archive quality copy should be created for any video source where possible. A true archive video should adhere to the following guidelines:

Also whilst not absolutely required, in terms of our guideline specs the video should be in the YUV colorspace and use 4:2:0 Chroma at minimum, 4:2:2 preferred. Audio should be

More details on the process of capturing and storing archive video can be found in an extensive guide which will be available soon. In the meantime, please PM me if you're capturing a tape and need some guidance.

These archive copies are just that, for long term archiving and use 10, 20 or even 50 years down the line. They re not intended for day-to-day viewing, and are unsuitable for doing so due in large part to the codecs used and large file size.

As already noted, for many years now the "viewing copy" for any video has been, wherever possible, a DVD. More on why we're no longer recommending this format can be found in FAQs below, but let's now cover the new recommended format.

The outer container that holds the video and audio together. Do not mistake this for the actual encoding format of the video, containers can carry a variety of video and audio codecs. We have decided on the MKV container as it can contain practically any video or audio and is extremely well supported, as an open source format. MP4 is another popular and widely supported container but it does not support FLAC audio inside it, so was discounted.

The video itself should be encoded with the MPEG-4 AVC/H.264 codec. Most are probably familiar with this codec as it is by far the most popular used today in video. Blu-Ray, Internet Streams, TV Broadcasts etc all use or are moving to use H.264. It is approximately 50% more efficient in encoding than MPEG-2, which hypothetically means an MPEG-2 video at 6Mbps will look as good at 3Mbps in H.264. It's not quite that simple in reality, but the savings in size at the same quality are clear.

It also helps that there is an extremely high quality and efficient free H.264 encoder in x264. Matured over 13+ years the quality of this encoder is second to none, used by most major names like Facebook, Youtube, and even by some studios when encoding Blu-Ray movies.

It's also important to move away from the "8Mbps CBR for everything" approach to video. Whilst technically it's a sound approach, for the vast majority of videos it's just overkill, resulted in a needlessly bloated file. Going forward, with this new set of guidelines, the goal and ethos is to encode based on what the source needs, so that your encode is transparent to the source at the lowest bitrate where that is still true. Some videos may be as low as 1Mbps, some may be as high as 6Mbps or 8Mbps even with H.264. For some videos even 8Mbps MPEG-2 wasn't enough to retain all of the detail.

Practically all video source we will archive and encode will be interlaced in nature. As per above in this case the archive copy MUST remain interlaced, to take advantage of any future advances in technology. An archive format should always match the source exactly - if it doesn't, it's not a true archive copy.

However when it comes to the distribution copy we strongly recommend de-interlacing but ONLY if you are able to use the correct tools to do it properly, doing a better job than software players or hardware devices like your HDTV can do on-the-fly. To retain the full motion fluidity of a 25fps/29.97fps source AND retain all original data/resolution you need to de-interlace by making each field a full frame, which means the output is double the framerate.

If you were to de-interlace by discarding frames to end up with 25/29.97 progressive frames the fluidity would be lessened. There are also other de-interlacing tools and methods, such as blending frames, which is also not so good.

Another detail of the video is that any black lines or "dirty" lines can and should be cropped away entirely. This will result in framesizes that are unusual, like 696x568, but this should not be a problem for any hardware or software players. This is a personal choice more than anything though. If you do not want to crop and instead retain the standard resolutions, you can.

All of this will be covered in more detail in an encoding guide.

When it comes to audio we have come to what we believe is the best compromise between quality and wide compatibility. Thanks to the versatile MKV container we can now include FLAC audio instead of uncompressed LPCM as was the case on a DVD. This will mean further saving on filesizes, as the audio will be anywhere from 20% to 60% smaller.

However, whilst any computer software will play an MKV file with FLAC audio a lot of hardware players will not, such as HDTV built in player, video game consoles, portable media players etc. For this reason we need to also include a lossy AAC track, which practically any hardware from the last 10+ years can decode, as long as it's only "regular" AAC, not HE-AAC or any other advanced variants.

AAC is a far more efficient audio codec compared to MP3, AC3 and MPEG-1 and so chances are at the recommended quality of approximately 256kbps most are unlikely to even notice the difference.

Again for compatibility reasons, the AAC track should be the default audio track, the FLAC will be the second track. This means the files will play without a hitch on practically any hardware but for those that support FLAC, it can be switched to on-the-fly for lossless audio.

On some videos you may wish to include more than one audio source, such as a dub of a better sounding source, or perhaps a stereo track and a 5.1 Surround Sound track. How you encode and add these is up to you, we only require that the default track is AAC and FLAC is an option for the original video audio. Anything else is your decision.